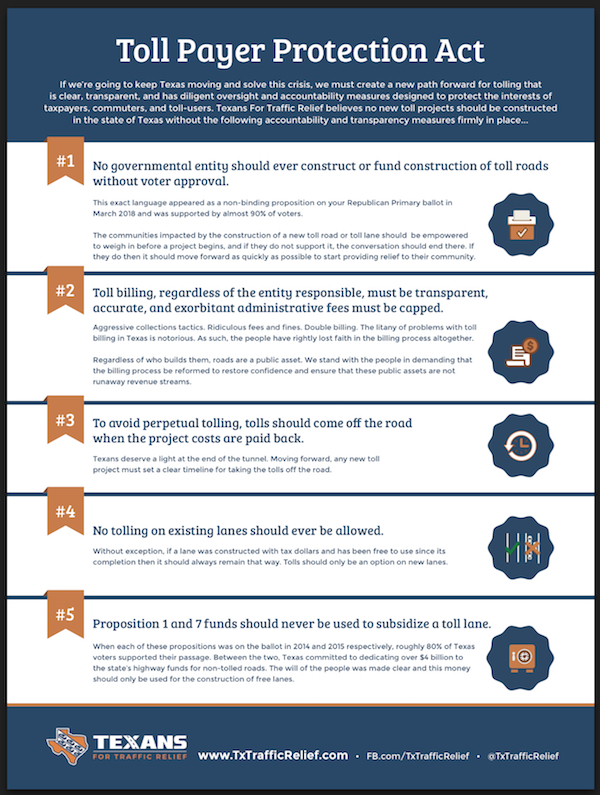 Lobbyist  David White  is pushing a Toll Payer Protection Act to undermine Governor Greg Abbott’s ‘No more toll road’ pledge to voters. Thanks to Abbott's edict last November, no more toll roads can be built. White's goal is to get enough GOP counties to pass this protection act to pressure the Governor to cave on his promise to 'we the people' and open the door back up to toll roads in all 254 counties across Texas. They’ll eventually win those public votes by holding our roads hostage (never fix them) until we cry 'Uncle!' and capitulate to tolling it. They want that revenue and they’re not accountable for how it’s spent like they are with gas taxes. Tolls are an unaccountable slush fund for roads and the road lobby.

Here’s the Austin Monitor article  listing him as one of the paid lobbyists hired by City of Austin to undermine property tax reform. So he’s not pro-taxpayer as he appears to be with the Toll Payer Protection Act.

Public Blueprint is a lobby firm seeking county resolutions in support of their so-called Toll Payer Protection Act. While everything listed sounds great, they simply co-opted the grassroots' 4 top reforms and added their own at the top — a public vote on toll roads. What could be wrong with calling for a public vote, right? After all, 90% of GOP primary voters passed it earlier this year.

First, Public Blueprint are paid lobbyists for the private corporations like Cintra whose private toll road on SH 130 went bankrupt in less than 3 years, leaving taxpayers on the hook for a $438 million federal loan while a new company took over and gets to collect tolls until 2042. Public Blueprint lobbied for public private partnerships that hand our roads over to such private, foreign corporations who are guaranteed profits, taxpayer bailouts, and are allowed to charge punitively high tolls (like one in DFW that tops $24/day). Their actions show whose side they’re on, and it’s NOT on the side of taxpayers as they claim.

Second, they took 4 of our big toll reforms and put them on a slick fancy paper and are taking credit for what we already accomplished. The only thing taxpayer haven’t secured yet is getting the toll off the road once the debt is paid - which is not only good policy, it's essential to ending perpetual tolls that violate the Texas Constitution’s prohibition against perpetuities. Though we got a great start on toll collection reform last session, taxpayers do need to extend those reforms to all toll agencies since the reforms that passed last session were limited in scope. Public Blueprint was nowhere to be found getting any of those things passed.
So, Public Blueprint is pushing the public vote, because it opens up the door to tolls in all 254 Texas counties, when right now, Gov. Greg Abbott and Lt. Gov. Dan Patrick kept their promise to voters and said 'no more toll roads.' So why is Public Blueprint pushing the one thing authentic, anti-toll grassroots don’t want? Because it’s what their clients want - more tolls. It gives them a foot in the door to open up the toll road pandora’s box once again. Even if voters say ‘No’ to a toll project in their community, TxDOT will simply stall adding any lanes and call for vote after vote (just like public schools do with bond elections) until the voters eventually give in to a new toll tax to pay for it. When TxDOT has learned it can profit from congestion rather than solve it, it has no incentive to fix our roads toll-free using our existing gas taxes, vehicle sales, and other taxes and fees we pay to build and maintain our highways. They want to tap a permanent new revenue stream - especially the kind that never comes off the road once it’s paid for. They’re in control of what ultimately gets fixed and when. The public lacks any means of forcing them to do a project non-toll since TxDOT can just refuse to fix anything and keep forcing public votes on toll roads until they win it. TxDOT tried it in San Antonio where no major highways were expanded for over a decade once taxpayers fought back on toll roads. They have us over a barrel, and they will use all means necessary to force you to part with more of your money.

Finally, as Sen. Bob Hall points out, since our state highways system crosses city and county lines everywhere, how do you call a fair public vote? Should voters within a particular city’s limits be able to impose tolls on a segment of our state highway system that thousands of outside commuters use (and paid taxes to build) when they cross over city limits daily? No, there is no way to fairly hold a public vote. So while allowing the public to vote on a toll road may sound like a great form of accountability, in reality, it will backfire on taxpayers.

Counties should instead pass a resolution demanding tolls come off the road when it’s paid for and instruct TxDOT to prioritize all the new funding they received with passage of Prop 1 & Prop 7 without resorting to raising the tax burden by charging perpetual tolls.