Yesterday, the two private, foreign corporations that tookover the Indiana Toll Road in 2006 filed for Chapter 11 bankruptcy. Former Indiana Governor Mitch Daniels sold it to Spanish infrastructure company Cintra and Australia-based Macquarie in a $3.8 billion, 75-year lease that raised eyebrows around the world.

Few thought a road could fetch so much money. It set off a chain reaction of state governments clamoring for quick cash to shore-up shrinking highway funding. Indiana used the money to build other highway projects, forcing Indiana Toll Road users to pay for other road expansion they don’t use. The state has long since spent the money in the short-term, but now the tollway is in long-term trouble.

When Cintra and Macquarie acquired the tollway, they immediately doubled the toll rates. The troubled road has failed to attract enough traffic to repay its $5.8 billion in debt still owed on the project. It shouldn’t surprise anyone that the road is in bankruptcy when they’ve doubled the cost to use it. In a true market approach, if not enough customers are buying your product, you lower the price, not increase it. The hedge fund and distressed debt investors that now own about 80% of the debt have agreed to allow Cintra and Macquarie to restructure their debt or dupe another company into buying it.

Former Penn State Professor Ellen Dannin explains how these companies cash-in even when they go bankrupt in Randy Salzman’s article on public private partnerships (or P3s) in Thinking Highways. She documents how these companies never intend to pay back the debt, but simply ‘mine the the code.’ The corporations first create a separate entity, usually with the road’s name in the title like Cintra and Macquarie did here with their Indiana Toll Road Concession Company, in order to protect the parent company from losses.

They structure the deals to be extremely long leases so that they can depreciate the road as an asset on their taxes. They put very little of their own money at risk as the equity (a mere $800 million out of a total $3.8 billion), and allow the private bond investors and/or taxpayers to take on the risk for the vast majority of its debt. The companies get their own equity back with some profit in just a few short years of collecting tolls. This leaves the other investors to the take the actual losses just about when the road is going to go bankrupt, and often when the road is also in need of major maintenance or rehabilitation.

Is the Texas SH 130 next?
The Indiana Toll Road was already in trouble when Cintra’s Texas State Highway 130 opened in 2012. The tollway was a brand new road, as opposed to an existing tollway, and the only stretch of the controversial international trade corridor known as the Trans Texas Corridor TTC-35 to ever be built. It was intended to serve as an alternative to the perpetually congested NAFTA superhighway Interstate 35. But it, too, is not attracting the level of projected traffic to keep it financially solvent.

Moody’s downgraded Cintra’s debt to junk bond status last year. In June, Cintra failed to make its full debt service payment, placing its SH 130 Concession Company in ‘technical default.’ But this time, Cintra and its minority partner San Antonio-based Zachry American Infrastructure used a $430 million federal TIFIA loan as part of the $1.3 billion debt package, which is backed by the U.S. taxpayer. If the traffic fails to show up (only half of the projected traffic has materialized) and the tollway goes belly-up, the taxpayers go down with the ship.

On Cintra’s two other P3s in Texas, the debt-risk picture gets even more bleak for taxpayers. On the Interstate 635 contract in Dallas, the total project cost was $2.6 billion with $2 billion of that price tag coming from the taxpayers. Cintra landed an $850 million TIFIA loan, $615 million in Private Activity Bonds (also a federal program, special tax-exempt bonds just for these toll road deals), and $490 million in gas taxes from Texas taxpayers.

On the project called the North Tarrant Express in Ft. Worth, Cintra snagged 7 different stretches of highway in one bid. They snagged the development rights which gave Cintra the right of first refusal on all of them under two ‘best value’ bidding procurements (see here and here).

Out of a total cost of $3.7 billion for the projects, $2.8 billion came from the taxpayer: $1.2 billion in TIFIA loans, $673 million in PABs, and nearly $1 billion in other unspecified ‘public funds.’ Segment 3B was 100% funded by taxpayers. All told, $1 billion in just gasoline taxes alone went into the I-635 and North Tarrant Express projects, yet Texans will still be charged a hefty toll (up to 95 cents a mile) to use it.

Cronyism infects P3s
It’s no coincidence the first three Texas P3s went to Cintra. With direct ties to Governor Rick Perry’s office, Cintra’s lobbyist Dan Shelley worked for Cintra, became the chief legislative liaison for Perry in 2005 when he secured the development rights to the Trans Texas Corridor for his former employer, then went back to work for Cintra.

The rest, as they say, is history. Cintra had the rest of its P3s in the bag thanks to Rick Perry’s personal branch of cronyism. Perry gave a keynote address to the International Bridge Tunnel, and Turnpike Association’s annual conference last week in Austin, telling attendees from 18 different countries that, “You have come to what I would suggest is the mecca of innovation on transportation infrastructure.”

Cronyism and putting taxpayers on the hook for private corporations’ losses isn’t ‘innovative,’ it’s a rip-off as old as politics itself. So all eyes will be on Cintra’s SH 130 this December when its next debt service payment is due - both the December payment along with the remainder of its June payment. Perry’s highway department is already supplying the second round of subsidies for the failing tollway by offering another $32 million in public money to allow trucks to use the tollway for the same rate as autos. The first round of subsidies did net an increase in truck traffic, however, as soon as the subsidies stopped, the uptick in truck traffic did, too. The Texas Department of Transportation (TxDOT) is only too happy to keep the subsidies coming since they have a revenue sharing agreement with Cintra.

But absent a major uptick in traffic, even with TxDOT help, the tollway is headed for bankruptcy. TxDOT put it on life support likely long enough for Cintra to at least re-coup its own meager equity of $210 million. However, any further subsidies or bailouts are just putting off the inevitable. Failure to pay its next debt service payment will land Cintra-Zachry in bankruptcy just as Perry’s presidential hopes will kick into high gear. This time, the nation will be watching. 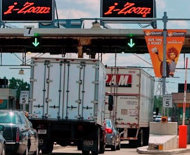 Public-private transportation partnerships continue to fail around the world. The Spanish-Australian consortium that runs the Indiana Toll Road became the latest casualty seeking Chapter 11 protection in the US Bankruptcy Court for the Northern District of Illinois. On Tuesday, Judge Pamela S. Hollis began hearing the case.

This was supposed to be a model deal for other states to follow. In 2006, then-Governor Mitch Daniels (R) leased the 157-mile Indiana Toll Road to Cintra and Macquarie Bank, operating as the ITR Concession Company, in return for an up-front payment of $3.8 billion. Daniels promised to use that money to build new roads over ten years under a program he called "Major Moves," while the consortium was allowed to charge motorists steadily rising tolls until the year 2081.

The consortium came up with the cash by borrowing $4.1 billion off the prospect of a "guaranteed" stream of future toll returns. Revenue projections proved to be unrealistic and the consortium was unable to turn a profit.

"The global economic recession and actions undertaken by the United States and various European governments in response thereto have driven interest rates down to historic lows, creating a substantial net obligation under the debtors' interest rate hedging obligations," consortium CEO Fernando Redondo told the court in a filing on Sunday. "As a result, absent a restructuring, the debtors will not have sufficient cash flows to service their funded debt obligations... and operate the toll road in a prudent manner."

Motorists paid $196 million to use the road last year while the consortium owed $193 million in debt service payments. This left just $3 million to cover the cost of 244 employees, maintenance, capital upgrades and related expenses. Reserves were exhausted in December, and the consortium missed a $102 million interest payment in June. With interest, the consortium's total debt obligation now stands at $6 billion.

The promise of the Major Moves Fund also failed to deliver. The $2.6 billion fund was supposed to have been set aside from the $3.8 billion payment to the state government. It was to grow by 5.25 percent annually from investments. That did not happen, and the money ran dry in 2013, though tolling will continue for at least another 69 years.

The toll road's failure is not necessarily unexpected or unwanted for the companies involved. Australia's Macquarie Bank, which indirectly owns half of the consortium, is known as the "millionaire's factory" with a knack for turning profits from flipping assets and collecting management fees, according to a lawsuit filed in New York (view case).

Such failures are common. The 91 freeway high occupancy toll lanes in Orange County, California was one of the first modern toll projects to go belly up, with the county taxpayers in 2003 paying for more than the original cost of construction to buy out the project. San Diego's South Bay Expressway went bankrupt in 2010 and was also bought out by county government. California's Foothill-Eastern Transportation Corridor Agency, which runs the 241, 261 and 133 toll roads in Orange County, has been teetering on the edge of default despite $1.7 billion in subsidies from the taxpayer. The agency in charge of the road refinanced in December, extending the tolling period out to the year 2053.

In South Carolina, the Greenville Southern Connector went bankrupt in 2010. Transurban, the Australian company that runs the Pocahontas Parkway in Richmond, Virginia, wrote down the toll road as having a value of $0 in 2012.

Help us fight to preserve our rights and freedoms!

or donate by mail. We cannot do it without you!