On March 26, the MPO passed a resolution to expand segments of 281 & 1604 WITHOUT TOLLS. Yet TxDOT came back with a financing proposal that still included tolls. TxDOT presented various versions of a proposed hybrid financing plan for 281 & 1604 to the board on June 4 and again on June 15.

Changes were made to this proposal between the June 4 & June 15 MPO meetings and its June 25 meeting. In fact, changes were made to the proposal over the weekend prior to its Monday, June 25 meeting (which was less than the 72 hours notice required by law) without notifying the board until they walked into the meeting June 25. The final proposal adopted June 25 takes an existing main lane on 281 and converts it into a bus-toll lane ('transit priority lane'). The dedicated bus lanes were never discussed prior to the meeting. 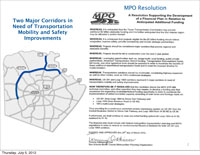 Slide 2 shows the March 26 resolution passed by the MPO, authored by Com. Kevin Wolff, to ADD new non-toll main lanes AND frontage roads to segments of 281 & 1604. 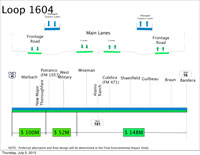 Slide 8 shows the TxDOT proposal still includes tolls in this section from Bandera to Hwy 90. 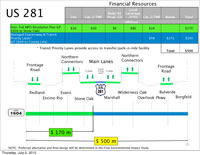 Slide 10 had never been presented to the board prior to them walking into their June 25 meeting, yet the proposal was adopted on the same day (with no public notice). Slide 10 shows after the proposed re-configuration of 281 there will only be 4 non-toll main lanes when there are 6 there now, hence this does not comply with the March 26 resolution that promises ADDED non-toll lanes, and, in fact, it takes away an existing free main lane. (NOTE: This slide is purposely deceptive since there will be transit-toll lanes in the middle of the 281 in the green section, yet TxDOT does not reflect it with a blue line.) 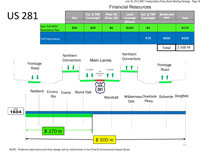 Slide 19 (from June 25 board mtg packet) shows a different version of the TxDOT proposal presented to the board and posted on the MPO web site 72 hours prior to the June 25 meeting that shows differing amounts of money for 281, and clearly represents the fact that there will be toll lanes throughout the entire 7.8 miles. This does not comply with the March 26 resolution. It, too, shows there will only be 4 non-toll main lanes when there are 6 there now.